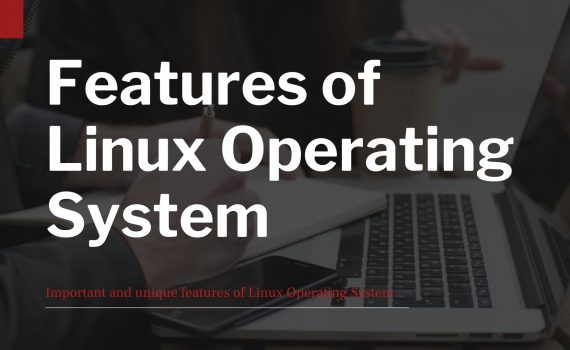 Linux is the most reliable, highly secured and worry-free operating system having the highest number of servers running on the Internet. It dominates supercomputing by powering 100% of the world’s supercomputers and 86% of all smartphones all around the world.

What are the Features of the Linux Operating System?

The Linux operating system acts as an interface between the computer of a user and computer hardware.  It allows users to execute various programs efficiently.  This article gives an overview of the features of this multiuser operating system.

Linux, being the leading operating system in servers, is free to use, modify and distribute. The open-source operating system has gained immense popularity around the world because multiple teams work together to make Linux stronger and better.

Linux is more secure as compared to other operating systems such as Windows. Data encryption, password protection, and controlled access help in safeguarding security. Before gaining access to any important file, it is imperative for users to provide a password. Besides, users can encrypt their data when using Linux.

Linux software works on both high and low-end hardware without any deviation. Users don’t need to worry about incompatibility because the multilingual operating system can be installed on any hardware. Linux training in Chandigarh helps professionals build successful careers. Practical training assures the nitty-gritty of the operating system so that aspirants can get the job in their desired company.

Linux is different from other operating systems in many ways. From computers to other electronic devices, you can use them smoothly. Linux operating system allows users to run more than one application simultaneously.

Among the best features of Linux is the freedom of using the operating system by many individuals. It means that multiple users can use system resources, such as RAM, Memory and Hard disk at the same time without any issue.

Similar to the Windows operating system, users can enjoy the feature of Graphical User Interface. All it requires is just a simple installation process and you are good to go.  Besides, an ordered filing system is highly beneficial in arranging system and user files in a systematic order.

With the help of various programs, users can issue the commands to Linux so that it can execute them flawlessly. In order to carry out various types of application programs and commands, users just need to instruct it so that it can carry out them effectively.

For optimum performance, this operating system is preferred in word processors, tablets, supercomputers, smartphones and Android devices. Users can try/run the Linux OS without installing it. Regardless of where you live in the world, you will receive it.

Bottom Line Linux operating system allows users to install or download any application with a command. Due to the rising demand, many multinational companies look for professionals with hands-on experience in the Linux operating systems. CBitss is a leading institute in Chandigarh for Linux training in Chandigarh. Here, you will learn from a team of professionals having decades of experience under their belts.